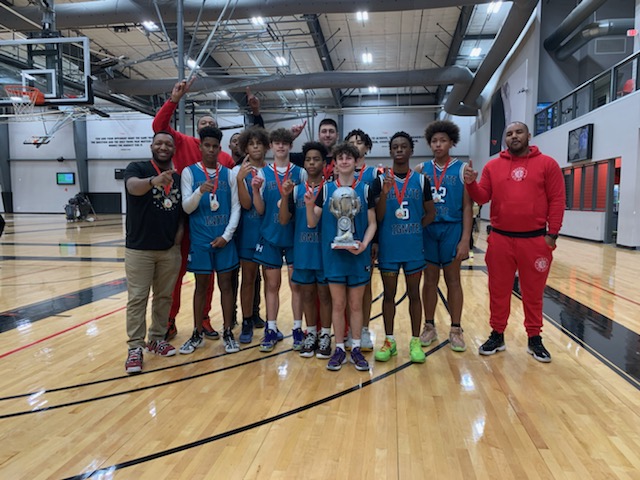 The UH Ignite 2027 team traveled to Dallas, TX for the Jermaine O'Neal Cost 2 Cost Preps national tournament and made its case as one of the top teams in the nation during the team's national debut. Nick Reber's corner 3-pointer in the final minute broke a 73-73 tie in a spectacularly contested gold division championship game as Ignite took down SneakerSteal 78-73, finishing 6-0 on the weekend to bring home the trophy. The team topped elite clubs from around the country and lit the gym on fire throughout the weekend with spectacular performances up and down the lineup, including from BOD Top Performer Nick Reber.

What the coaches said:

Jase B
"Mr. do it all. He was a game changer on both sides of the ball and impacted every game in major ways." - Coach Michael C

"Jase really showed he can compete and play at an incredibly high level and is a player many will have their eyes on into the future. His motor and skillset, combined with his length and athleticism, is unique and he showed it with numerous stints throughout the weekend where he took over games on both ends of the floor." - Coach Robert D

Branson B
"Brought great toughness and defended at a high level like he always does." - Coach Michael C

"Branson once again showed why is the type of player every coach wants to have on his team. He was tough and physical defensively and frustrated opponents throughout the weekend by defending on the ball at a very high level. He is a great teammate and brings a dynamic few players can, but every team needs to compete against top teams." - Coach Robert D

Izayah C
"Really gave us a presence on the glass and on the block. Also did a great job protecting the rim on defense blocking or altering shots." - Coach Michael C

"Showed his physical dominance in the post on offense and in the paint defensively, altering or blocking shots and rebounding at a high level." - Coach Robert D

Travon D
"Was tough and physical all weekend. Made a lot of plays by just out-hustling people." - Coach Michael C

"Another player that did a great job embracing his role and showing his versatility as a player throughout the weekend. He is tough, physical, and did a lot of the dirty work with great hustle plays on both ends of the floor." - Coach Robert D

Peyton L
"Made the game easier for everyone with how easily he scored the ball." - Coach Michael C

"Peyton really set the tone with 23 in the first half of game 1 and continued to play at a high level throughout the weekend. He did a great job opening the floor for his teammates as defenses focused on him and proved he can consistently do much more than shoot at an elite level." - Coach Robert D

Donovan M
"Played the game with great patience and poise. He made the right plays and created for others." - Coach Michael C

Malachi M
"Played the game under control and is one of our most consistent defenders and playmakers." - Coach Michael C

"Did a great job embracing his role with an elite group and played at a high level throughout the weekend, especially on the defensive end. We consistently talk about how coachable he is as a player and this weekend was a great example of his development as a result of being coachable and committed to being a part of a winning team." - Coach Robert D

Nick R
"Played at an extremely high level on both ends and was elite in transition." - Coach Michael C

"Nick really established himself as one of the elite players in the 2027 class, showing his versatility as a player and stepping up on both ends of the floor in the biggest games and biggest moments. He was resilient and simply wouldn't allow us to lose in really tough battles in both the semi-finals and championship games. His game-winning three in the championship will go down as one of the biggest shots in the history of the program." - Coach Robert D